With the arrival of winter, and home heating costs continuing to increase, there has been much discussion in Americans’ homes about the rising costs of energy – and discussions in Washington about ways to alleviate those rising costs, including restricting exports of domestic resources.  But, restricting exports of US liquefied natural gas (USLNG) is not the solution.

Exporting oil and natural gas has helped meet global market demand with cleaner fuel sources while also having a significant positive effect on the US economy. Calls to restrict USLNG exports fail to recognize the global nature of the energy landscape and the importance of our country’s role in the market. Any restriction on USLNG exports could have long-term negative impacts on domestic energy prices, the global economy and climate goals.

Curtailing USLNG exports would have drastic, and maybe irreversible, impact on our country’s climate leadership.

USLNG is the single most powerful tool we have at our disposal to reduce global emissions by displacing coal use around the globe. For example, if China replaced its planned new-build coal power plants with natural gas ones, it would result in the emissions reductions equivalent to that of the entire US renewables sector.

Not only is natural gas a cleaner fuel, natural gas produced in the US also carries a lower greenhouse gas (GHG) emissions profile than the gas produced in most other regions of the world, like Russia, which is the world’s largest emitter of methane[i]  producing a methane intensity of more than 50 percent higher than natural gas from the US.

USLNG Exports Strengthen the Security of the US and its Allies

Energy supply is a key asset in the global balance of power. America’s energy production is a source of strategic strength that supports both our climate negotiations and worldwide diplomatic goals.[ii]

In close coordination with our allies in Central and Eastern Europe—who have built new LNG import terminals and gas pipelines—USLNG has helped Poland, Lithuania, and other nations break free of predatory pricing practices of the state-owned gas monopolist to their East.

If America is unable to support our allies’ demand for clean and affordable natural gas, demand will increasingly be met by Russia.

Much of Western Europe and Asia are now facing an energy crisis, as anti-fossil fuel policies, and a politically forced transition to renewables has stifled local production of oil and natural gas but done nothing to affect demand for low-cost and reliable energy.  European natural gas prices are up more than five times from a year ago, as Asian consumption has risen and supply has tightened around the world. Russia supplies about half of the Europe’s natural gas, which heats homes and powers industry.[iv] International Energy Agency chief Fatih Birol estimated in October 2021 that Russia could boost exports to Europe by 15 percent.

Global demand for low-cost and reliable energy sources like natural gas will continue to increase for decades. In response to actions taken this year by the Administration, The Wall Street Journal opined that if the US restricts its ability to meet global energy needs “Russia, China, and Iran will take advantage of America’s astonishing fossil-fuel retreat.”[v] As an example, the WSJ explained: “In November Rosneft announced a $170 billion oil and gas project in Russia’s north, which it claims can supply the entire world’s oil demand for a year. It says the project will become the world’s largest liquefied natural gas producer by 2030. Russia is also laying down thousands of miles of oil and gas pipelines to supply Europe and Asia.”

Beyond Europe, USLNG can and will bring geostrategic benefits to other regions.[vi] Banning US LNG exports would be a gift to OPEC and Russia by boosting their revenue and market share across the world.[vii]

There are several factors that contribute to price fluctuations in any commodity: supply, demand, and costs to produce and transport products. Fortunately, fears that USLNG exports would contribute to higher domestic prices have not borne out, and while natural gas prices have varied over time, they have stayed below historical averages and show no direct correlation to exporting activity. 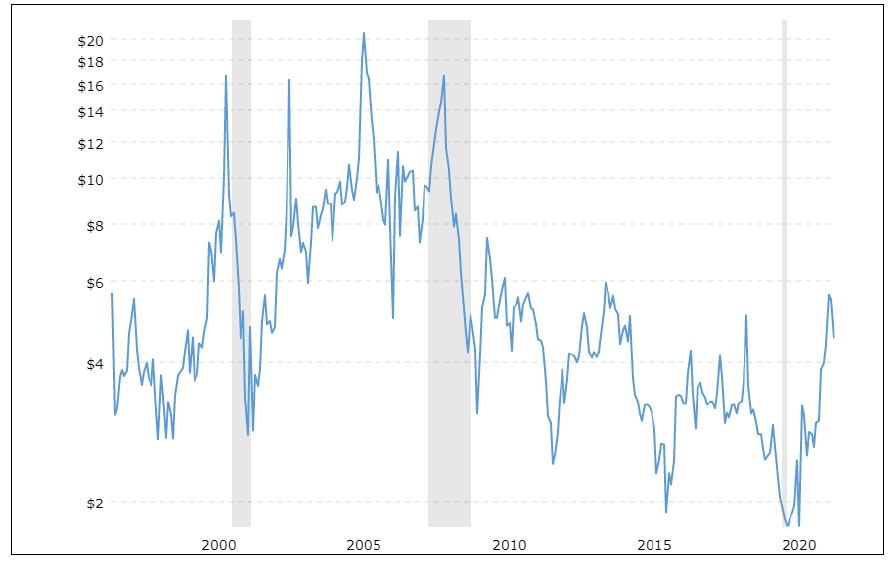 Public policies that seek to starve traditional oil and natural gas production inevitably lead to higher prices both domestically and globally, so when an administration signals a shift away from affordable and reliable fossil fuels, or makes policy decisions to restrict domestic energy, prices go up.

The worst thing an administration can do to energy prices is restrict supply by implementing policies that make it harder to produce or transport energy – like restricting production on federal lands and waters (which account for about 20 percent of domestic production), imposing costly and duplicative regulations, calling for new taxes and fees on the industry, discouraging investment in traditional energy companies, and failing to approve much needed energy infrastructure.

Inadequate pipeline infrastructure limits access to the natural gas needed to heat and power homes. We’ve seen this specific issue in the Northeast, where according to the Massachusetts Department of Energy Resources, “In the winter, demand for natural gas to heat our buildings and generate electricity exceeds the amount of natural gas that the existing pipeline infrastructure can deliver into the region. This causes wholesale energy costs to spike and the generators within the Independent System Operator of New England (ISO New England or ISONE) control area, to rely on liquefied natural gas (LNG) and carbon-intensive fuel oil to generate electricity to maintain electric reliability.”

Unfortunately, short-sighted polices and regulations have resulted in cancellations to more than 4.75 BCFD of natural gas pipeline projects in the Northeast (PennEast, ACP, Constitution and Diamond East), and delays to a further 2.4 BCFD of Northeast gas pipeline projects (Mountain Valley Pipeline, Northeast Supply and Northern Access). These cancellations and delays have deprived people in the Northeast of access to lower-cost natural gas from nearby producing regions. The near impossibility of completing new pipeline projects into big urban areas like Boston and New York means that people in need of affordable energy are paying the most – despite the abundance and low-cost supply of nearby US natural energy resources.

The lack of pipeline infrastructure in the state not only prevents producers from being able to send more gas to the Northeast, but it also contributes to the fact that about 60 percent of Maine residents and more than 25 percent of Massachusetts residents are dependent on heating oil. In fact, Massachusetts is the third biggest consumer of heating oil in the country. Heating oil costs about double natural gas and emits about 30 percent more carbon.

Between 2005 to 2020, US natural gas production nearly doubled during a period known as the “Shale Revolution”.[ix]  Even as prices of most household goods increased significantly, energy costs went down due to domestically produced oil and natural gas unlocked through hydraulic fracturing and horizontal drilling technologies. Natural gas prices are 45 percent lower today compared to pre-Shale Revolution prices (Nov. 2000);[x] a result of fracking transforming the nation’s energy landscape. 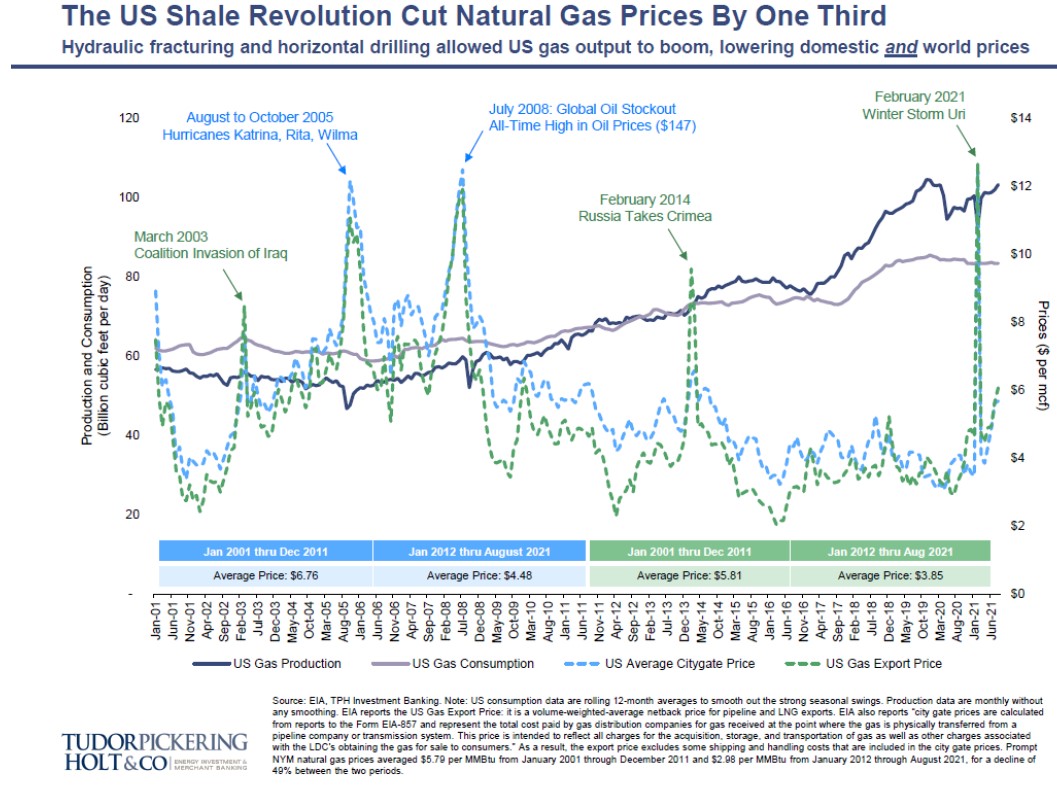